Here are some links to interviews

and examples of my work ﻿

THE WORLD OF COMEDY WRITING  by Jenny Roche

When people think of comedy they’re more inclined to think ‘stand-up comedian’ and unless you’re writing a TV or radio sitcom non performing comedy writers tend to be invisible. Did you know there are lots of comedy writers writing for TV and radio panel game and quiz shows? Have a look at the end credits of these shows and you’ll see lists of ‘programme associates’ or ‘script associates’. These are all comedy writers adding to the material produced by the comedy panellists.

Stand-up comedians are always advised to write, write, write but not every stand-up can come up with new material on a regular basis. On the circuit it might be possible to use the same material, or additions/adaptations of that material, with different audiences. Once that comedian gains repeat bookings at a venue, or a TV appearance, many people will hear that material. That might be 1,000s if not millions in the case of a TV appearance and we all know what happens when you’ve already heard a joke. It’s not funny, is it? Lots more material is needed and there might not be enough time to generate it or the ideas might not be flowing.

Having studied comedy over many years (I needed to do that so I’d have an idea of what I was talking about when I taught comedy writing) the kind of material used by comedians has changed. Although there are some comedians today who use one liners and packaged jokes stand-up comedy has largely been taken over by observations and anecdotes. This kind of material does have the advantage of not having to be scripted word for word as it can be told as a story. This helps with defining and embellishing a stage persona and style and it also has the advantage of making it more difficult for somebody to nick your jokes.

One major difference between comedy writers and comedians is that comedians only have to write for themselves and their own style. A comedy writer on the other hand often has to write in a lot of different styles and for others to perform. Having written material for radio, TV and stage shows I’ve always had to study the tone and style of the shows and the performers. I’ve not only had to adapt my writing to suit, I’ve also had to write to the requirements of the different mediums.

I’m of the mind that being a stand-up is an occupation more in line with the performance and stage skills required of actors while being a writer, well, you basically just need the skill of working with words. Two very different kinds of jobs so no comedy writer should ever feel they have to be a performer too. Nobody expects a playwright, or a sitcom writer, to be an actor too.

I got my first breaks in comedy writing by writing topical sketches and lines for weekly radio shows. There’s not so many opportunities of this kind around today but if you can write with a touch of humour there’s lots of other opportunities. You might find a comedian with a good stage presence but rotten material who’d be glad of a collaborator. You can write jokes and comedic sentiments for greetings cards, photo bubbles and single cartoons. You can write cartoon strips for others to illustrate and scripted comedy for film, video, animation, pantomime and theatre plays. You can write humorous articles, short stories and novels. In fact if you can inject humour into any kind of writing you’re onto a winner. Comedy writing skills are even becoming a much sought after skill in the worlds of advertising, promotion, publicity, business, training and education as a means of getting information, advice and messages across in a more interesting, entertaining and easily absorbed way.

A link to my guest blog - How I Became A Writer

An article on writing for overseas markets. First published in Writing Magazine
http://www.sitcom.co.uk/writers/overseas_writing.shtml

An article on male and female comedy. First published in Writing Magazine

A mention of one of my stand-up comedy day schools.
http://www.manchestereveningnews.co.uk/news/s/1073522_city 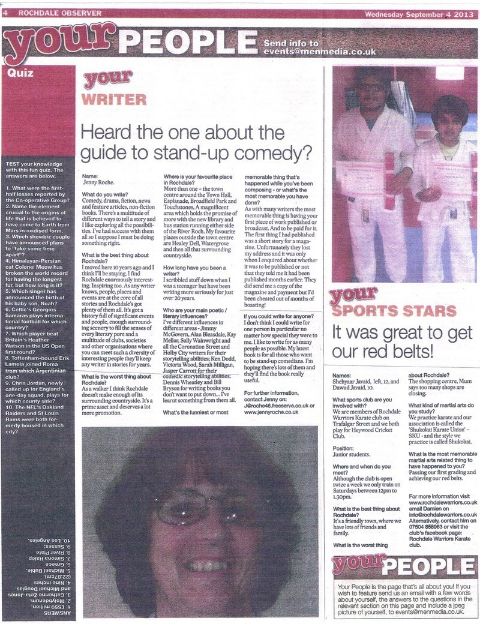 A book for anyone who wants to be serious about becoming a stand-up comic and wants to do it well. Lots of down-to-earth practical advice on crafting a successful set and gaining confidence in your material.

Available from Amazon and other suppliers.

My book covers all kinds of comedy writing from writing jokes, sketches and children's humour to stand-up, sitcom, humorous fiction and non fiction - and everything in between. Copies still available on Amazon.

I've been contributing to Writers' News magazine for over 20 years. Included monthly in Writing magazine, it's stuffed full of markets and news.